Most beginning film makers know that lighting is important to film and video, but most don’t know where to start. If they bother using lights at all, their lighting kit usually consists of a couple of lights which they place without a clear idea of their effect, and they spend too much time on set moving and adjusting them before they are happy with the results. Perhaps you’ve got a built-in lamp on your camcorder – and although it lets you film your friends at night, you’ve noticed that the light is bland and makes your subjects look like they’ve been caught in a hunter’s searchlight.

In this article I’d like to briefly discuss the most basic type of lighting design – three point lighting. As you probably know by now, there is far more to lighting your subject well than just flooding them with enough light for the camera to register an image. Lighting not only illuminates the subject, but when done well it can paint them with colour and contrast, meaning and emotion.

But before you can really experiment with expressive and unusual lighting, you need to understand the basics of lighting design. Understanding the neutral look of three-point lighting will give you a good starting point from which you can begin to experiment with expressive lighting techniques, some of which I’ll cover in upcoming articles. Before we start, a couple of points:

This feature assumes you have read and understood the previous article Lighting Basics. Please check it out now if you haven’t already read it, as I’ll be using terms and concepts that are explained there. Also, during this feature I’ll be making several general statements and outlining “rules” when it comes to lighting. As always, these rules are just guidelines – basic rules of thumb from which you should feel free to depart depending on your shooting situation or the effect you wish to create. But you can’t break the “rules” effectively until you know what they are…

Three lights is really the minimum needed to achieve a professional lighting result, whilst still giving some flexibility for expressive lighting. These three lights are usually referred to as:

Key Light
The key light is a hard light source, which is placed to one side of the camera and up high. It’s light can be likened to the light from the sun on a clear day – a bright light with hard-edged shadows. It provides excellent “modelling” in that it highlights the shape and contours of the subject.

Fill Light
The fill light is a soft light source, which is usually placed on the other side of the camera from the key (but closer to the camera), and at about the camera’s height. It’s light can be likened to indirect sunlight reflected light from the environment. It provides the “filling in the shadows” light in that it lowers the contrast between light and dark in the image, and it casts very soft indistinct shadows.

Back Light
The back light is a hard light source like the key, but it is usually a smaller light and it is shone from behind the subject. It’s light is purely for modelling effect, in that it helps overcome the two-dimensional film image and makes the subject stand out from the background. It is sometimes referred to as the “highlight” as it is often used to give a sheen or highlight to an actor’s hair.

Putting it All Together

Let’s have a look at the effect of these lights on a simple subject – an apple (in this case, a computer-generated one). 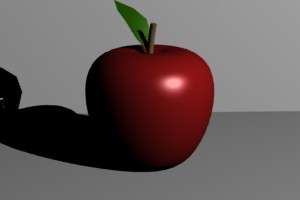 Above we see just the key light, placed up high and to the right of the camera. It provides excellent modelling as we can clearly see the round shape of the apple and it’s clear, hard-edged shadow. But the shadow areas are completely black, we cannot see anything there, and we don’t usually want this much contrast in our image. 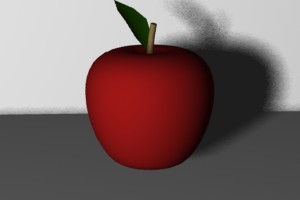 Above we see just the fill light, placed on the other side to the key and at camera height. It provides a lovely soft light with no harsh shadows or excessive contrast. But you can see how flat and bland it makes the apple look as it provides little modelling, and we usually want our images with more contrast than this. 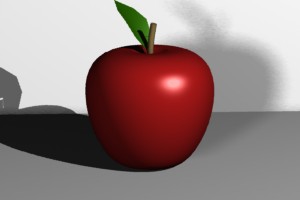 Above we see the key and fill combined. This gives a pleasing compromise between the contrast of the key and the soft light of the fill. The fill light allows us to see into the key’s shadow, whilst still retaining the key’s modelling effect. 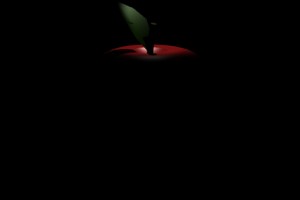 Above we see just the back light. It provides a hard light adding extra modelling and depth to the image. Notice also that the cone angle of the light has been narrowed so that it only lights the apple, and casts no shadow onto the set. 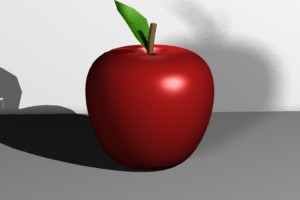 Above we see all three lights combined. Three point lighting provides a good overall balance between contrast and fill which will serve you well for many shooting situations, from interviews to dramatic films. It also serves as the basis for more complicated and/or expressive lighting set ups.

But the point here is not to restrict your creativity, but to enable you harness it. Once you understand what is “neutral” to your audience, you can begin experimenting with light, as long as your changes are relevant to your project. We’ll be covering various aspects of lighting in future features, but until then consider the possibilities – you could get rid of the fill light to give a more hard-edged look to your interview with a criminal. You might increase the amount of fill to flatten out an interview with a dry bureaucrat to make them look even more bland and boring. You might add some coloured gel to the back light to give extra impact to it’s light (red for an angry interview?). You could change the angle and height of any of the lights for effect. The possibilities are limited only by your imagination.